conducted by Robert Silverstein for
mwe3.com

LET’S SEE ACTION!
An interview with Roger Daltrey
of The Who

Listen to a
RealAudio sample
of the interview

The triumphant performance of The Who at the October 20th Concert For New York at Madison Sq. Garden was a sheer musical revelation. Driven in spirit by Beatles legend Sir Paul McCartney, 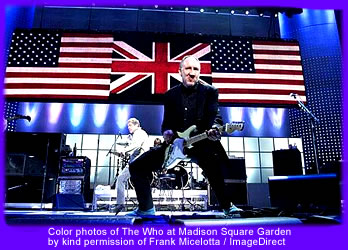 under quite somber circumstances, the nearly six hour Concert For New York spotlighted appearances by Sir Paul’s new quartet (featuring guitarist Rusty Anderson, drummer Abe Loboriel Jr. and keyboardist Gabe Dixon), The Who, Mick Jagger & Keith Richard, Eric Clapton & Buddy Guy, Billy Joel, Elton John, David Bowie as well as a host of other rock legends and notable up and coming groups. The short but to-the-point set from Who founders Pete Townshend, Roger Daltrey and John Entwistle (assisted by Zak Starkey on drums and John "Rabbit" Bundrick on keyboards) was clearly one of the highpoints of the heartbreaking, yet crucial benefit concert for the victims of the September 11th tragedy. Fueling the hopeful speculation of long time Who buffs, Roger Daltrey, the group’s original founding member and dynamic lead vocalist verifies, in this interview, that The Who are aiming towards recording their long awaited studio album comeback. Amazing to think it’s been over 18 years since the last new Who studio disc, 1982’s It’s Hard. Despite that fact, now two years into their now five decade spanning legacy, The Who remain one of the ever essential pop & rock bands of the 20th Century - perhaps second only to The Beatles for the sheer impact they’ve had on the development of modern pop culture. When The Beatles broke up, taking that fateful walk across the Abbey Road in 1969, it was up to The Who to carry on the tradition of English rock and roll. And carry on they did throughout the ‘70s with trendsetting studio albums like Who’s Next (1971), Quadrophenia (1973), The Who By Numbers (1975) and the original band’s final album together with the late, great madcap percussion genius Keith Moon, Who Are You? (1978). With a little luck and alot of determination, the time will come once again for The Who to flex their musical muscles and minds, if only to again show everyone just how omnipotent rock and roll as an art form can be. Gearing up for the October 20th benefit at the Garden, Roger Daltrey took time out of his busy schedule to speak with MWE3.COM reviews editor Robert Silverstein. Among the topics touched upon during the interview were the new Who live DVD, Live At The Royal Albert Hall, the 2001 reissue of the group’s classic 1970 live album Live At Leeds and of course, forecasts for the first Who studio album in nearly 20 years. The following interview took place by phone on October 10th, 2001 3PM Eastern Standard time.

Roger Daltrey (RD): Hi Robert. How are you?

Roger! It’s a real honor to speak with you. Back in ‘65 when I was 11, one of my proudest possessions was The Who’s Decca single of "I Can’t Explain". I was one of your earliest teenybopper fans here in New York. 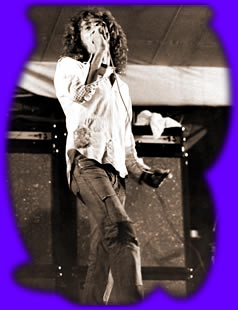 RS: And ever since then I’ve been a huge Who fan. I just want to start by saying, seeing The Who on stage at the Concert For NY Fundraiser in Madison Sq. Garden on Oct 20th will surely give a sense of spirit and strength to those who’ll be there as well as the millions tuning in show. How did The Who come to get involved in the October 20th Concert For New York at the Garden?

RD: We were asked to do it by Harvey Weinstein and you can’t say no. I mean, it’s as simple as that. I mean those people gave their lives. The least we could do is give our time. It’s as simple as that. We’re all in this together. We’ve all got to pull together on this. And we’ve got to get on with life. We’ve got to learn to laugh again. We’ve got to learn to enjoy ourselves again, otherwise, these lunatics out there - because there’s no compromise with these people - have won.

RS: They’re telling us to carry on with our usual activities otherwise the terrorists win.

RD: Well you have got to. I mean, we have had terrorism in England for a long time, as you know, with the Irish problem. So you do get used to living with it. I mean it’s never been on the scale that you have it there. But that’s more by luck (and a series of alot of events) than anything else. But I mean we lived with bombs for thirty years, and people being blown up on the street. But you do get used to it. And you do learn to live your life through it. And obviously every life lost is a complete tragedy, in whatever conflict, but you’ve got to get on with life. Life is very precious. It’s there to be lived to the max. You pull yourself back, and get there.

RS: On a lighter note, I’ve been playing the new double disc Who DVD Live At The Royal Albert Hall just out on Image Entertainment. The sound and video are simply stunning and the sound is so tight it’s almost like The Who never broke up...

RD: We didn’t break up! We just stopped touring. And we did stop touring. You have to remember the touring that we stopped was non-stop on the road and we just had enough of it. And we didn’t tour for eight years and (then) we did a kind of reunion tour. Y’know Pete kind of mooted that he’d left the band, but I don’t think spiritually he’d ever left it.

RS: Was that the first time The Who played The Albert Hall?

RD: Oh no we played many, many times.

RS: The Royal Albert Hall DVD features The Who as a five piece with Rabbit on keyboards and Ringo’s son Zak Starkey on drums. Zak’s playing is great and it sounds very Keith Moon inspired.

RD: Well it is. Moon was Zak’s tutor. Ringo gave Zak his first drum kit, then unfortunately they were going through a nasty divorce. Moon was a really good friend of the family and actually taught Zak to bang the skins. To turn the drum sticks around and use the fat end! (laughter)

RS: Is Zak a member of The Who now? 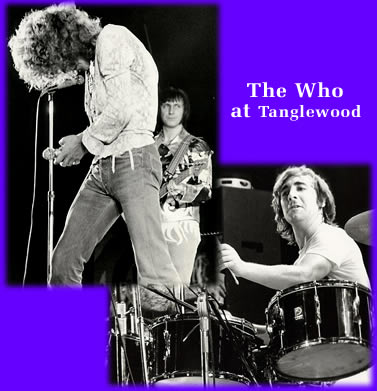 RD: Well we just love him as a person considering what he’s been through in his life. Extraordinary, imagine what being the son of a Beatle is. I’ve got the utmost respect for him as a musician and as a human being. Fantastic guy.

RS: The Royal Albert Hall DVD features a great balance of early, middle and later period Who songs. With so many great songs to choose from, how did you select the tunes that ended up on the new DVD?

RD: It’s the biggest problem we get with The Who. Y’know everybody says, we want a new album, we want a new album, which we are going to try and produce, but we still got the problem that we can’t play what everybody wants to hear at one of our shows at the moment. So you kind of just pick the ones that you think will make a really good performance, you go through a few obscure ones for the real Who fans and you keep the popular ones in there for people that have never seen The Who before. It’s kind of a juggling act. You can’t please all the people all the time. You do your best.

RS: It was also great to see new revivals of "The Relay" and "Let’s See Action" on the new DVD. Wasn’t "The Relay" part of Pete Townsend’s original Lifehouse concept?

RS: Looking back on the song what do you think Pete was expressing in "The Relay"?

RD: Talking about what a song’s trying to say is like talking about art (laughter). Y’know, I think it’s in the eye of the beholder and the ear of the listener. (You hear) one line, and so many people will get two completely different things from it. So I don’t like to talk about those things.