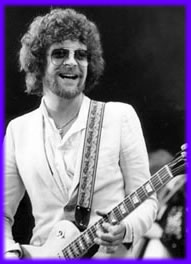 JL: Oh, I love producing! When everybody started asking me after I’d done Cloud 9...Tom Petty came to me and said, ‘Do you fancy writing some songs together?’, I said, ‘Sure, love to’. And that’s how we got Full Moon Fever. That was a year after...an album that I really love as well.

LA: When you sit there and you’re working on a song that you’re doing the bass and drums, where do you start?

JL: Where do you start? With a click track! (laughter).

LA: Obviously you can’t put the drums down first.

JL: No you just put some kind of tempo down.

LA: It’s funny ‘cos we were talking to some guy out in California, Jason Falkner. I don’t know if you’d heard of him. A young guy who just put out a fantastic album. And he did all the instruments on the album. I asked him, ‘where do you start?’ and he said ‘I always put the drum track down first.’ (laughter) But he did.

RS: I heard that George is planning a new album. Are you going to be involved in that?

JL: I don’t know anything about that, sorry.

RS: I’d like to talk with you about some of your productions. Your work on "Let It Shine" from the 1988 Brian Wilson solo album. Brian stated in an interview that you wrote a good portion of that song. How did that whole thing come together?

JL: Brian played keyboards on it. I played bass on it and guitar and some piano. But mostly, Brian did all his own harmonies. Fantastic, big block harmonies. It suddenly sounds like, ah...The Beach Boys. And it was fun doing it. It was different.

RS: He lives in L.A. and you live in L.A. I was thinking you and Brian could do something like that again. Brian and Ringo worked together on Ringo’s last album. Do you ever see Brian in L.A.?

JL: I see him now and again, in restaurants...

RS: Could we talk a little about Roy Orbison? I was reading your description of how powerful Roy’s voice really was. Any other memories?

JL: Oh lots. Mainly the difference of him mumbling through the words just to get used to the meter. And then him strokin’ it up. It was so shocking. Wow!!

LA: Did you crank the meters while he was mumbling?

LA: When you were working on Zoom did you have an engineer in the room with you?

LA: So you’re not on the board doing it yourself?

JL: No, I’m not doing it meself. It’s got too far advanced now for me, Pro Tools, which is great. I know how it works, but I can’t hit all the right buttons.

LA: One of the things about Zoom that I noticed when I first listened to it, and you brought up an interesting point - is that music in the ‘90s, and now in the 2000’s - is that it sounds digital and I hate digital. But I read that you do have Pro Tools digital...

JL: Yeah but I go to analog first.

LA: It sounds it. It’s got the warmth.

JL: And also Pro Tools is 24 bit which is better than a CD anyway. And so I sort of got converted when I went 24 bit. My engineers convinced me. Both my engineers, they’re both from the analog school but they both draw from the digital world as well. So they’re both experts at both things.

LA: So you’re starting on tape and then going digital?

RS: Both me and Larry are big fans of the first ELO album with the "10538 Overture". I know EMI in England is putting it out as a double CD along with CDs of The Move’s Message From The Country and Roy Wood’s Boulders. It seems the perfect time to once again dust off the first fabled ELO album.

RS: I know Sony is putting out the upcoming ELO reissues in America and I guess EMI is doing it England.

JL: I think it’s just the first two albums that EMI owns and the rest are owned by Sony.

LA: Did they involve you at all with the reissues? 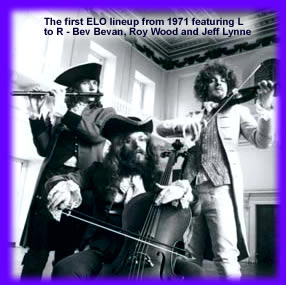 JL: They do yeah, but they didn’t used to though. It used to bother me when I’d find like really strange tracks next to each other that didn’t really belong. But now they’ve come and asked for meself and my manager’s input. Especially Sony. Sony has been actually brilliant. Every step of the way they’ve been totally one hundred percent behind it.

RS: The ELO box set Flashback sounds great. I know you were really involved with that.

JL: Yeah, I enjoyed it. It was real hard work. It took six months to do that box set.

RS: I know you’ve worked with some of your great guitar heroes including Duane Eddy and Hank Marvin. I guess those influences were big for you?

RS: You recorded "Theme For Something Really Important" and "The Trembler" with Duane. George Harrison was on there as well.

JL: Yeah, George played on there.

RS: I guess The Shadows were a huge influence as well.

JL: Absolutely. I learned every tune by The Shadows on me first guitar, a plastic one I borrowed from my friend. An Elvis Presley guitar. I learned all Shadows tunes on it. One finger up this plastic neck. Then I had this bright idea, putting a bass string on it. A low E string. On this plastic neck. And I had to pretend to me friend that it wasn’t broken, really. I’d say, ‘Oh, I’m just practicing one more tune, and then you can have it back.’ ‘Oh, sorry here it ‘tis’. All smashed to bits! (laughter)

RS: You also worked with Roy Wood again in 1990 on some unreleased tracks. "Me And You" and "Get What You Want".

JL: Oh yeah. Just a little demo in England we did, those two little tunes.

RS: Do you speak with Roy sometimes?

JL: I haven’t talked with him in a while. But we’re friends, y’know? He lives in England, I live over here. I don’t see him alot. I suppose it’s a couple of years since I’ve seen him.

RS: Is there anybody who you haven’t worked with that you want to work with?

JL: I don’t think so. I think that’s how I came to make the new ELO album, because I think I’ve produced and worked with all the heroes that I wanted to. More or less. So the next thing to do was to produce meself again.

LA: Isn’t it amazing that your career was able to take you to the point where you got to do all those things?

JL: Oh, totally amazing! I mean, I still marvel at it. Sometimes I lie there, y’know having a snooze, and then think back over all those sessions. And it’s great. I have to tell you. I’m very privileged to have worked with them all. 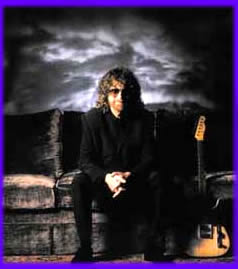 JL: It’s a tough question, but I probably would have said "I Am The Walrus". (laughter) But I wouldn’t call it a pop song as such. I think it’s just the greatest recording. The greatest pop recording. It’s a marvelous song. It’s lyrics are like, so peculiar and fantastically outrageous. It’s just a nice, beautiful blend of stuff, like outrageous stuff. Tuning the radio at the end, live on the mix. Ringo tuning in the radio. I mean, it’s got to be the best recording I ever heard.

RS: That’s in essence, where you, Roy Wood and Bev Bevan were heading way back when on the first ELO album?

JL: That’s what Roy said to a paper once and it stuck for years afterwards and it was a real drag trying to live that one down! (laughter). I never said it.

RS: The year 1971 was the year the first Electric Light Orchestra album came out and I was thinking about all the other classic rock albums that came out that year like Bowie’s Hunky Dory and Thick As A Brick from Tull. What was it about 1971 that stimulated such an burst of creative musical masterpieces?

JL: Beat’s me! (laughter). Everybody seemed to be just into recording I think. I can only tell you from me own point of view. I’d done a couple albums with The Idle Race and thought I was, like experienced in the studio by then. And I suppose everybody else did too and started experimenting. Thinking I knew what it was all about. Obviously, there’s many levels of making records. When you make your first one you think it’s great. Wow, that’s a record with a label on it and everything! And then eventually you get a gold record. I never dreamed I’d have one of them. I never really thought I would. Anyway, I ended up with loads of them, hundreds of them!

Thanks to Todd Brodginski of MSO, Randy Haecker at Legacy Recordings, Bob Dunn, Jeff’s friend Phil Hatton and special thanks to Jeff Lynne.