For fans of Jeff Lynne and The Electric Light Orchestra 2001 will be a year to remember. Riding high from the acclaim 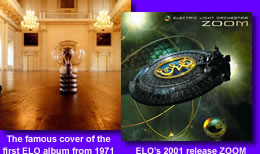 of the 2000 release of the ELO three disc box set Flashback, Lynne has once again revived Electric Light Orchestra and on June 12th, he will inspire fans with the group’s first album of all new material in 15 years.

The new ELO album, Zoom features thirteen amazing songs penned exclusively for the new disc. Produced, written and performed essentially by Jeff, Zoom artfully summons up the trademark pop sound the various ELO line-ups became famous for during most of the ‘70s and well into the ‘80s. Fans of Lynne’s recent work with George Harrison, Paul McCartney and Ringo Starr on the Beatles Anthology albums will be happy to know that 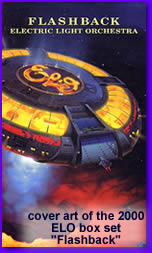 Zoom spotlights tasty guest appearances from both George and Ringo on a pair of tracks each. Like a vision out of some futuristic ELO fantasy come to life, Lynne, assisted by key players like long time ELO keyboardist Richard Tandy and the gifted Rosie Vela on backing vocals, is ready to take the newly revamped ELO lineup on the road for a late Summer 2001 tour. After listening to Zoom and speaking with  Lynne, it’s quite clear that the music great is happiest when working creatively in the studio, this in contrast to the looming prospect of the masses going wild in the midst of the forthcoming 2001 ELO stadium spectacular. As if the tour and a brand spanking new ELO studio CD isn’t enough, Sony Legacy and EMI Records in England are set to begin reissuing the entire, newly upgraded ELO back catalog in addition to other key recordings from Lynne’s fab pre-ELO band, The Move. Lynne had come to New York City to film an upcoming Storytellers special for the music video channel VH1 to be aired in mid June. During Jeff’s trip to the big apple, MWE3.COM founder and 20th Century Guitar music reviews editor Robert Silverstein and 20th Century Guitar publisher Larry Acunto were honored to share an in-person discussion with the pop producing giant at the posh Four Seasons Hotel on 57th Street in Midtown Manhattan. Among the topics discussed were the making of Zoom, Lynne’s now historic work with George Harrison and The Traveling Wilburys, the recent Beatles / John Lennon metaphysical reunion, those incredible, now historic ELO albums, Lynne’s celebrated productions and the much anticipated ELO tour. The following in person interview with Jeff Lynne (JL) was conducted by Robert Silverstein (RS) and Larry Acunto (LA) in New York City on April 18, 2001 at 4:30 PM.